It is no coincidence that Gonzagarredi is today one of only three companies worldwide whose Montessori materials are approved by the AMI (Association Montessori Internationale). Today, our showroom still keeps the originals of the first materials produced, as well as many other examples of the collaboration between Maria Montessori and Gonzagarredi. The first traces of this association go back to the early twentieth century and to her friendship with the Marchioness Maria Maraini Guerrieri Gonzaga, who was among the first to endorse and support Maria Montessori’s findings and invited her to stay on several occasions at Gonzaga. The first fruits of their sincere friendship and close cooperation was the “Carlo Guerrieri Gonzaga Children’s House” which opened in 1908. It was during one of her frequent visits to Gonzaga that Maria Montessori commissioned the creation of the first Montessori products from Ernesto Bassoli, who later founded the “Societa Anonima per Materiale Montessori (Montessori Materials Ltd)”, a company that would later become Gonzagarredi. The fact that the first real name of our company included “Montessori” it its title, not only fills us with pride, but bears witness to the unique and indissoluble Montessori roots of our company.

All of our products have been built on the principles of Maria Montessori and the company continues to develop those ideas. This is illustrated by the fact that even after the death of Maria Montessori, the Gonzagarredi Company shared its designs with the leading experts and most important Montessori associations throughout the World.

Although Maria Montessori, with her innovative ideas and love of children made history not only in our country but across the continent, Gonzagarredi is proud that it too has made and continues to make contributions every day to this small but important piece of history. 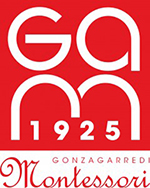